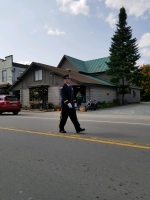 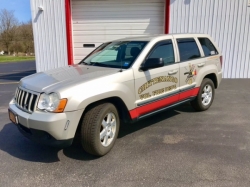 Welcome to the website of the Chittenango Volunteer Fire Department

The Village of Chittenango was founded in 1809 but didn't  have much fire protection until it incorporated in 1842.

On May 30, 1842 the Village of Chittenango appointed 24 firemen and 9 men to make up a hook and ladder company.  Because the Village was incorporated they could raise money through levying taxes to pay for fire protection so in November 1842 it was decided by a vote of 75 to 12 to raise $250 to finance a fire engine and hook and ladder apparatus.  The first engine they purchased was defective so a second engine was purchased from a company in Rochester for $325 and was paid for in 1843.

From its creation in 1842 through 1921 the department went through several periods of reorganization at which time all new members were appointed.  During the 1921 reorganization 30 new members were appointed and the Village purchased a new model T Ford fire engine.  The Chief of the department was John J. Johnson.  In 1928 a 500 gallon combination pumper was also purchased.

In 1942 the department held their first field days in an effort to raise funds.  The department held this event every year until 1992 when it was decided to no longer hold the event due to concerns over serving alcohol during the event.  Our department was one of the first in the are to stop holding these events.

In 1956 the Chittenango Fire Department purchased and provided an ambulance service for the area.  The department totally funded this operation including the cost of the vehicles.  The oxygen service saved many lives and was donated by the Chittenango Rotary.  The first PCR on record was dated 3/20/56.  This service was provided until 1989 when the Town of Sullivan contracted to a paid service to provide coverage for the area.  For a short time the department provided the backup ambulance and when it was time to replace the ambulance it was decided to just provide medical personnel transport to the scene in our squad to assist when needed.

For many years it was believed that the firemen was an all male organization until around the late 1970's when we had our first female firefighter join.  Today we have many more female firefighters that help protect our citizens and they are a very important part of this organization.  Today the Chittenango Fire Department is one of three departments that make up the Town of Sullivan Fire District.  The Chittenango Fire Company owns the building that the department occupies and the Town of Sullivan owns the apparatus and equipment.  We currently have 42 members that are active and many more reserve and inactive life members.

Over the last 175 years there have been many changes in equipment, training and tactics, although the goal of protecting the residents remains the same.

The above 175 year history was compiled from past records, documents and news articles, plus my personal experiences since joining in 1969 and information from other members.

This site has been viewed 83,058 times.
Calls
News
Events
Pictures
Apparatus
Maintained by the members and staff of Chittenango Fire Department. Designated trademarks and brands are the property of their respective owners. Copyright © 2006-2022. YourFirstDue Inc. All Rights Reserved. Content on this web site is supplied by Chittenango Fire Department. YourFirstDue Inc. cannot be held responsible or liable for any content, text, pictures, or any other media found on this web site.
Management login
Powered by